With a quick stop off in Melbourne (quick, as temps were 2 degrees C/35F ) to see the family, and for Lucy to spend some time at home with Matilda, I was off to the Gold Coast to finish off those long hard miles that everyone posts about leading into Kona. Only a stones throw away now as the days tick by. Being on the Gold Coast and Mooloolaba only a 2hr drive away (also being the 2016 70.3 WC course) I decided to break up the training with a weekend away with friends for a hit out. It was never going to be pretty with no rest and in hindsight I should have realised that lead-in races never fare well for me.

The course is spectacular; with an ocean swim and add in some waves, it made for a more enjoyable and interesting swim than the standard races.  From the gun I was on the rivet to hang onto the lead guys setting the pace and things did not change from there. Onto the bike and the body decided not to turn up to play. The high end threshold rev limiter exploded soon after T1 and as we rolled onto the motor way hitting speeds of 55-60km/hr, I watched the guys disappear up the the road. Tim Berkel, Terenzo Bozzone and Luke Mckenzie had a close and cracking race for the podium positions.  These boys had turned up to race while I had chosen to keep things rolling in the build to next month. It is always hard to predict where and what your competitors are doing one month out from Kona. 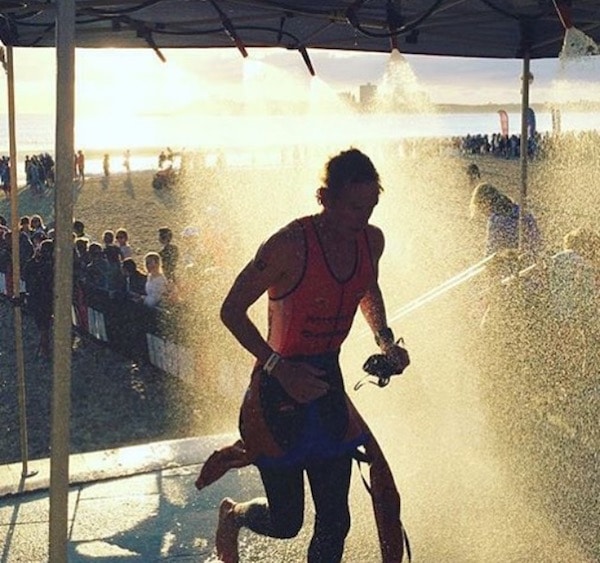 This past week involved a few days of easy recovery before getting back into the final 10 day block before resting to absorb all the hard work.  To give you an idea of what things have looked like, the past few weeks have included some long rides ~200k (124 miles), some solid riding behind the motor bike pacing at 45-50k (~30 m/hr) to deal with the top end speeds and the descent from Hawaii. Some LSD runs to harden the legs along with solid tempo sets. There are 50m pools and squads a plenty on the Gold Coast so there is never a shortage of surf swimmers to keep you honest and kick your butt in the pool.

All in all, things have gone well, training has been hard but enjoyable and the time up here has been productive. Today it was nice to head down to Byron Bay to catch up with a few of the boys (Tim Berkel – 7th Kona 2014, Tim Reed – multiple 70.3 Champion and Clayton Fettell) for a long run through the forest and to look for whales! Laughs a plenty, that’s what it is all about.

From here it is wrapping things up and trying to live by my 3 simple rules. Be consistent, don’t get sick and don’t get injured. Lucy, Matilda and myself look forward to getting on the plane and back to the sun, sand and surf of Hawaii.